My very first trip to Scotland this fall was pristine, and this Scotland travel guide is here to tell you why. I got to see Edinburgh, the birthplace of Harry Potter and a fantasy city, Loch Ness and the tales about its legendary monster, as well as try the delicious food, go to museums and many more. I’ll try to be brief with my posts but there’s nothing short of amazing about this trip, so you’ll have to bare with me through my lengthy post.

Scotland, although part of the United Kingdom, is a country in itself with so much history, culture, landmarks and traditions, it’s simply another planet altogether. The people of Scotland are lovely, I’ve yet to feel so much friendliness anywhere else. This trip was brief yet it got me craving more and more of Scotland. I will surely be back in no time to these magical lands.

Arriving in Edinburgh by train 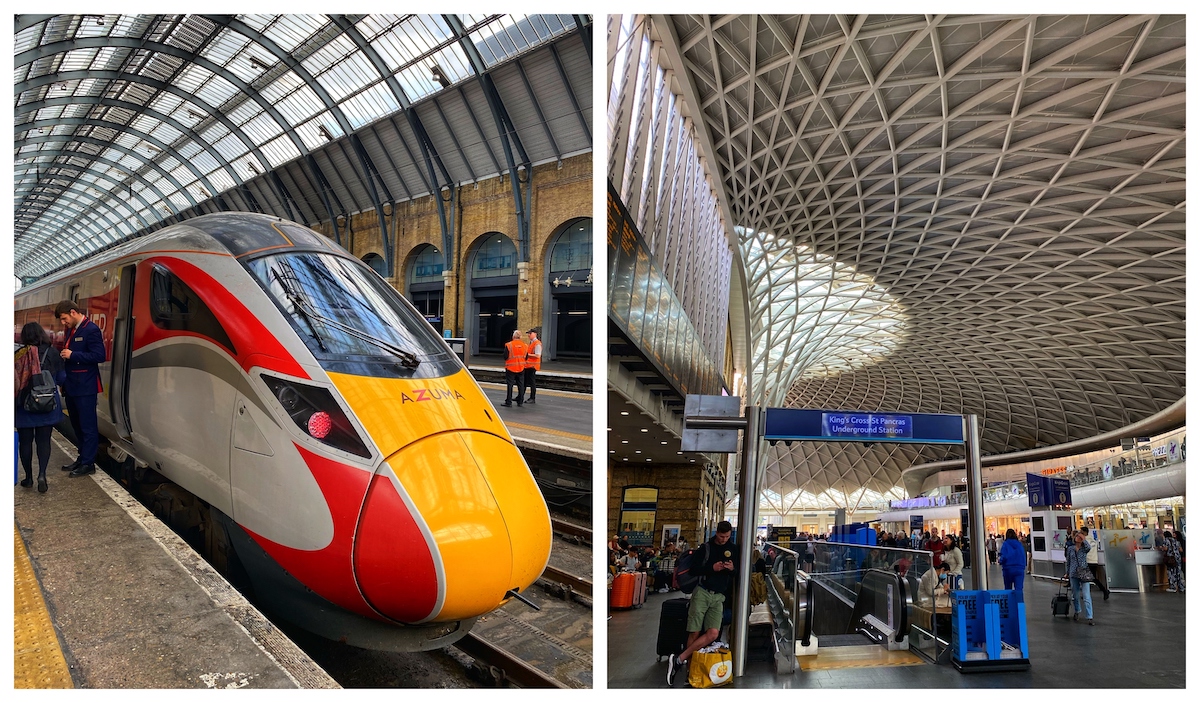 After a 2-hour flight from my hometown to London, I got on an overpriced train to King’s Cross Station in the middle of the capital city. Once there, I boarded the LNER train all the way to Edinburgh, for a total ride of 4 hours and 40 minutes or so. The ride was smooth, and the scenery got better and better as we moved closer to the city of castles and magic.

I booked a single room in a 150-year-old house on the outskirts of the city. No 45 was the name if you want to Google it. I paid around 100 pounds per night and the price was justified. The breakfast was simple but plentiful and Irene, our host, was the sweetest lady ever. The home is 10 minutes away by bus from the centre. I will stay at No 45 again when in Edinburgh, no doubt! 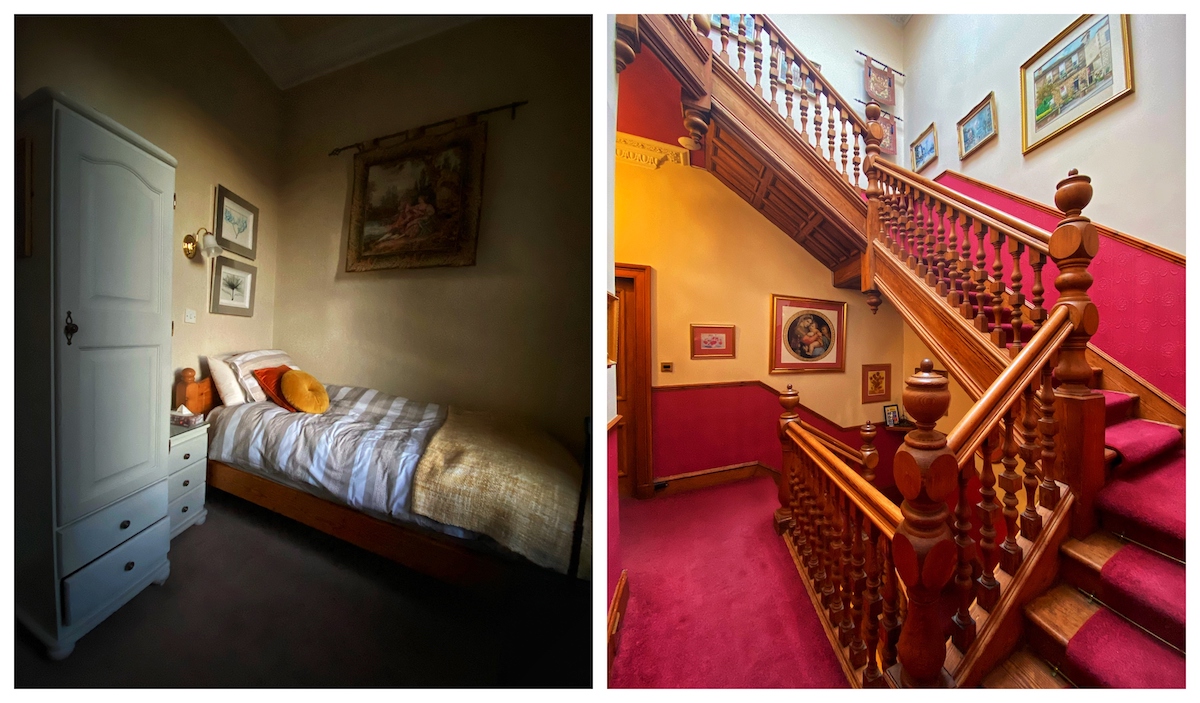 To describe Edinburgh in a 4-line paragraph is impossible. It was one of those cities in which taking a break, a nap back at the hotel, or simply sitting down and not doing something felt like a big waste of time. There are very few cities that still excite me after 30+ countries visited. Edinburgh was like a breath of fresh air, so different, historic, magical, interesting, exciting and vibrant. It was love at first sight. From the moment I got out of the station, I was in awe. Keep reading this Scotland travel guide for more on the city and beyond.

I booked a Harry Potter tour with GetYourGuide for 15 pounds for my first full day in the city. The tour started with the guide sorting us into Houses and I got Ravenclaw. Although I consider myself to be a medium Harry Potter fan, Ravenclaw won. I am very competitive. The tour took us to some key places where the mom of Harry Potter wrote the series, cafes and hotels. 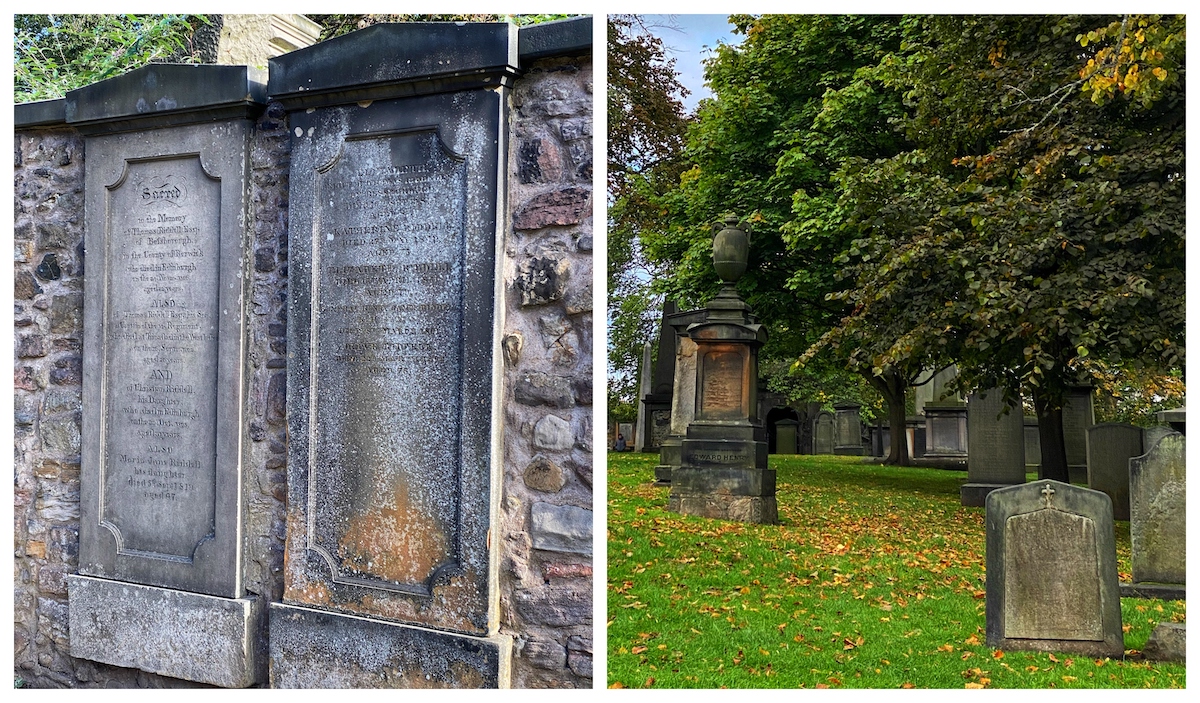 We also got to visit cemeteries and pubs. There is a pub, with beer, in the library of the University of Edinburgh. Rowling took some inspiration from the names she found in the graveyard in the middle of Edinburgh. Which is now a hill although it used to be a valley. Lots of people die. Many tombstones were stolen because they contained the names used in the books.

Scotland by bus with a Scottish guide… 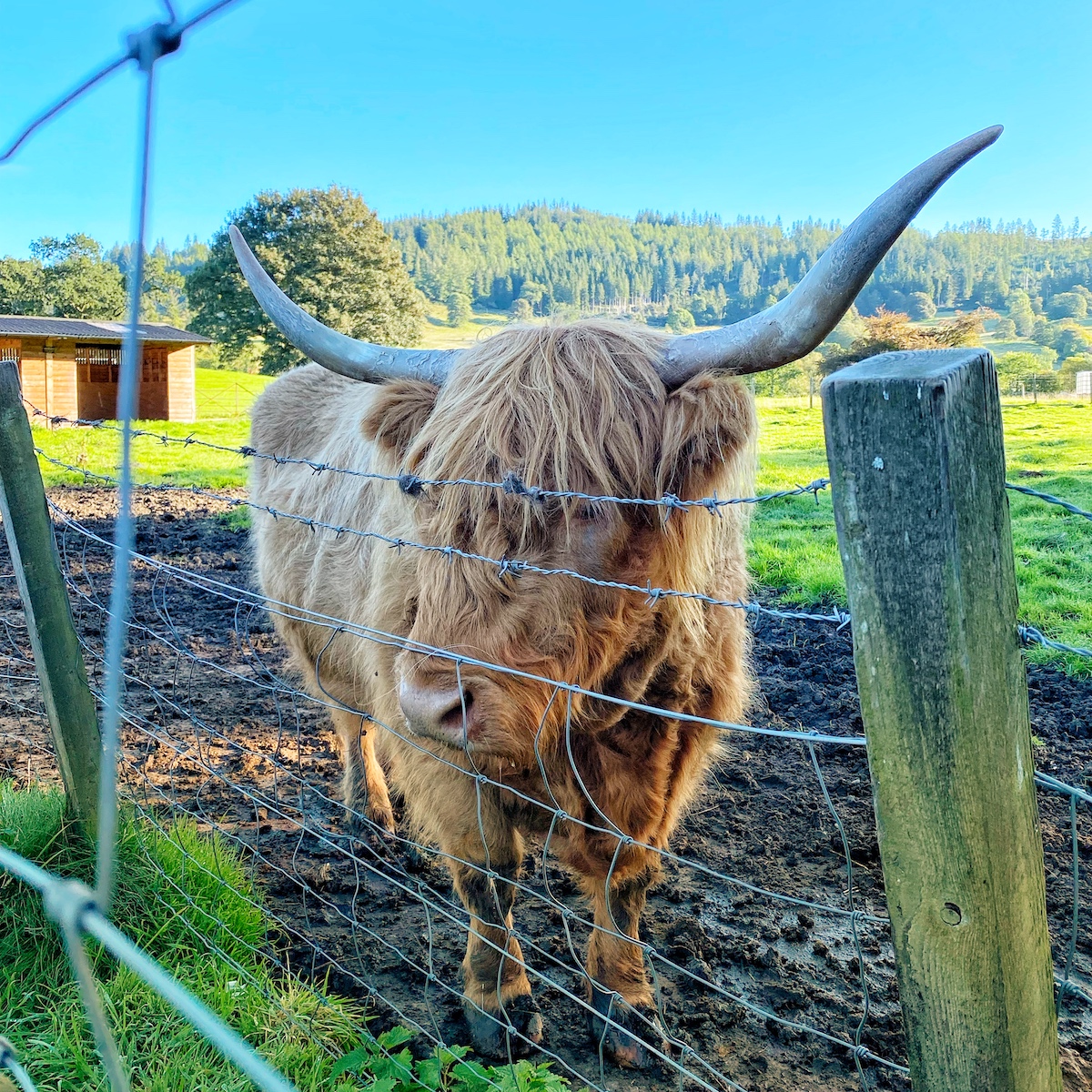 The next day, I took a bus for 12 and a half hours to the beautiful Loch Ness and back. My experience with boarding buses is not great. On my last trip from Budapest to Timisoara, when Ryanair cancelled my flight in Stockholm and I had to get home through Hungary, my Flixbus ride was from hell. When a lively Scottish guide keeps talking for 12 and a half hours though?

The guided tour of Scotland was incredible! The guide kept on talking about everything we’d seen while on the bus and outside of it. 12 hours felt like minutes at some point. It was morning, then it was the afternoon, and then we were back in Edinburgh. It was the shortest long bus ride I’d ever taken in my entire life. I’m sure Scotty the guide is still talking, the speech on that guy!

Out of this entire Scotland travel guide, including Edinburgh, remember this: Glen Coe is the most spectacular thing you’ll see. We pulled to the side of the road just at the base of The Three Sisters, which are three large mountains overlooking a valley with a river. The view was simply breathtaking. And that White House at the base of it all? Magical, surreal, and looked fake! 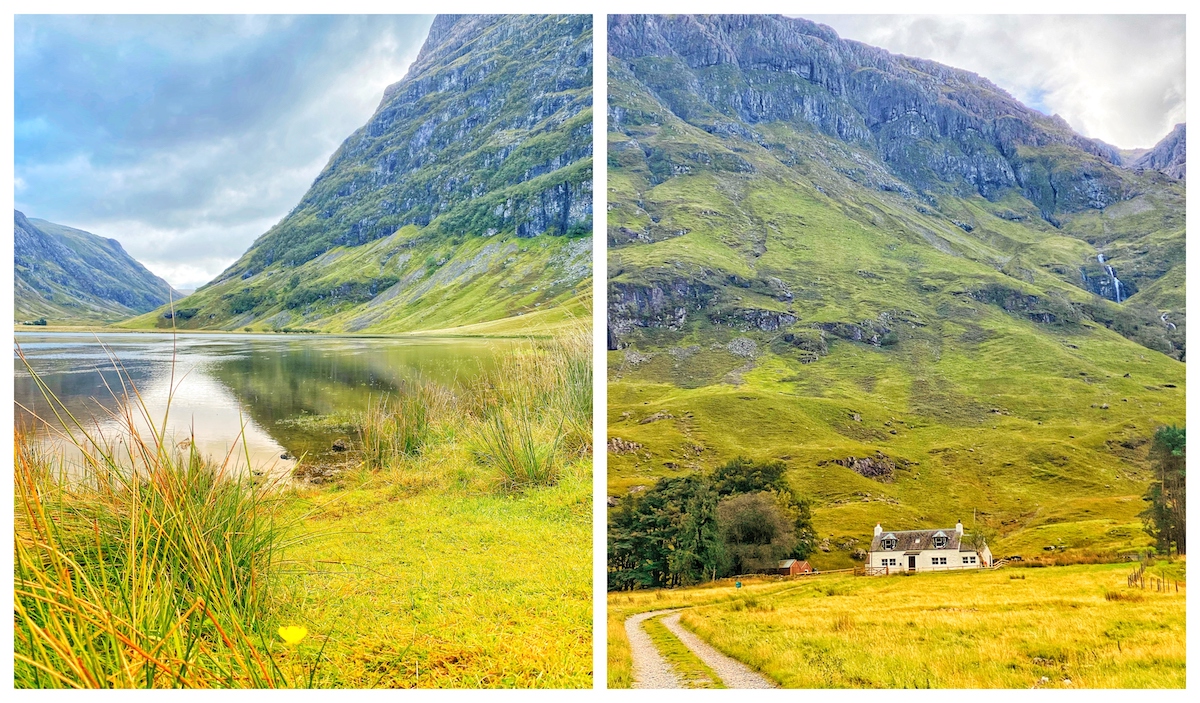 After hours and hours on the bus with the Scottish guide talking about mysterious rivers and fabricated monsters, we were finally parking the big red bus in front of the hotel right across from Nessie’s layer. Or water. It’s a lake so it can’t be a layer, right? Anyways, we debussed and went straight into the shops where we could find Nessie on a jam can. Really, Scotland?

I do get it, Nessie is the pride of Scottish folklore and part of its magic but the way they marketed the monster of Loch Ness was… complete! It’s not bothering you, as nobody is trying to shove things in your pockets. But I did find the venue a bit overboard as most items were 7 pounds or up. I’m not paying a small fish&chips for a Nessie keychain. I’m doing the food! 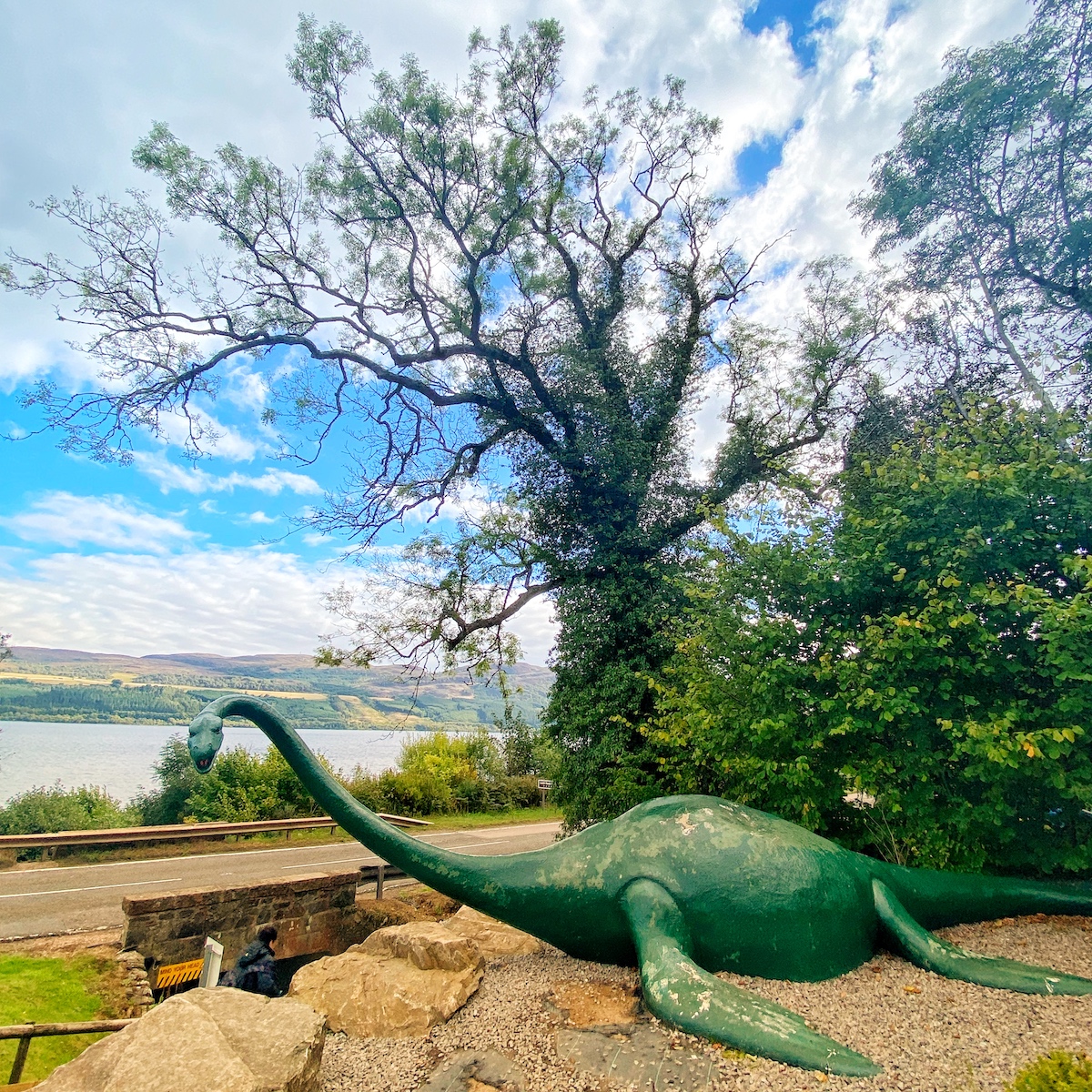 As for Nessie and me spotting the monster yes, I did. I walked down and to the right from the parking lot under the road. I stumbled upon some crooked wooden chairs and tables. Sat down to enjoy my launch, not minding the boats passing by. And then suddenly I saw a set of four waves looking like hunchbacks. Nessie? No, just water being drifted by the large tourist boat. 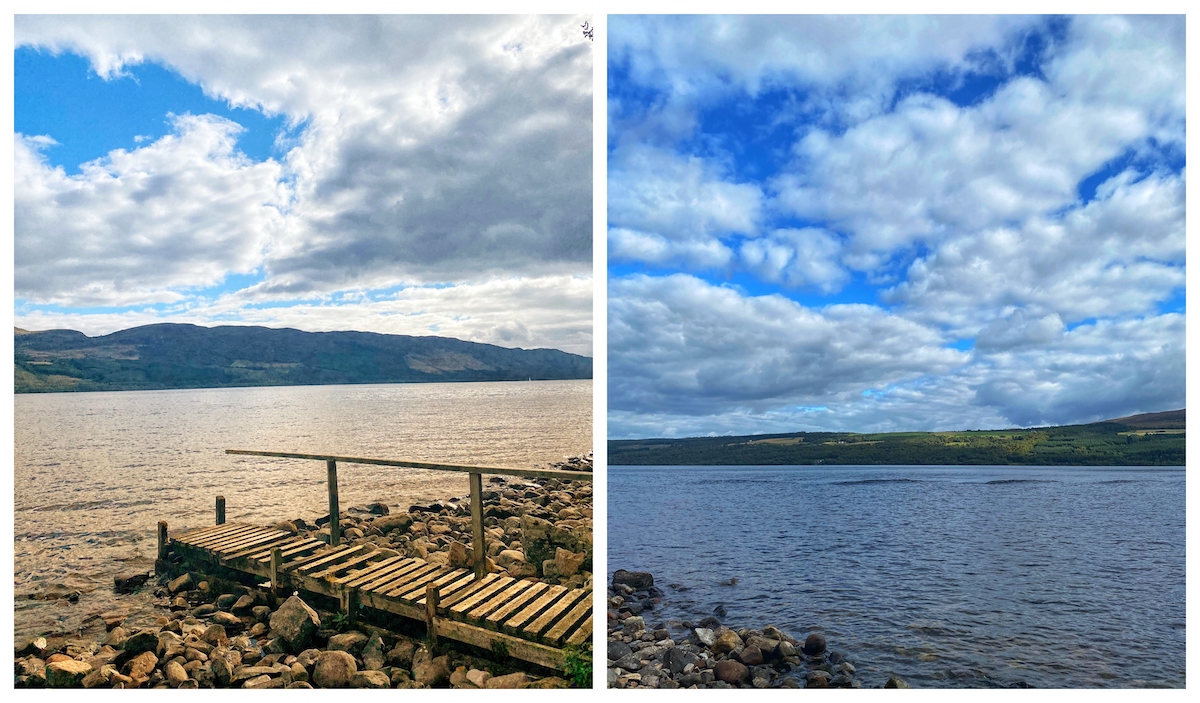 But the picture still looks convincing!

It is safe to say that I’ve had the best fish&chips of my life in Edinburgh. And in the middle of the tourist area, nonetheless. I usually avoid the tourist areas for food like a pneumonia patient who avoids the coronavirus. Yet the place was a recommendation from the lovely guide from the Harry Potter tour. I can’t resist the urge to follow a true ginger girl wherever she takes me.

The place I’m talking about is called Bertie’s Proper Fish&Chips and it is located right in Victoria. This is the Diagon Alley of Edinburgh, the place where Rowling got the inspiration for the book version of the street. The meal was so good, I went back every day for more. It even stood the test of box and time from a 20-minute bus ride from the city centre to my stay. Delicious!!! 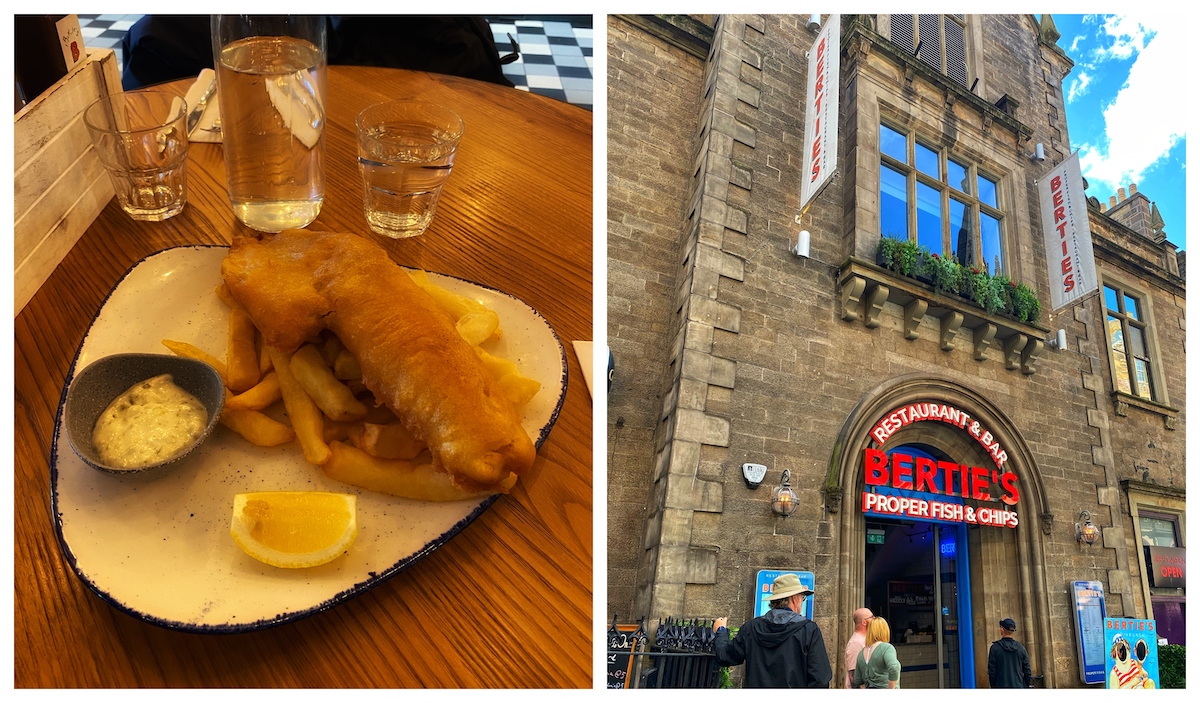 You can’t put it all in one Scotland travel guide to tell the story of just how much of a weird, quirky place this country is. Its national animal, the official national animal, is the unicorn. So it was no surprise that the Museum of Scotland was a display of the weird. Like Dolly, the only cloned animal on earth. You can say hi to her in the museum. Not to mention the other pieces, including the skull of Moby the whale or the chess piece from Harry Potter. Yup! 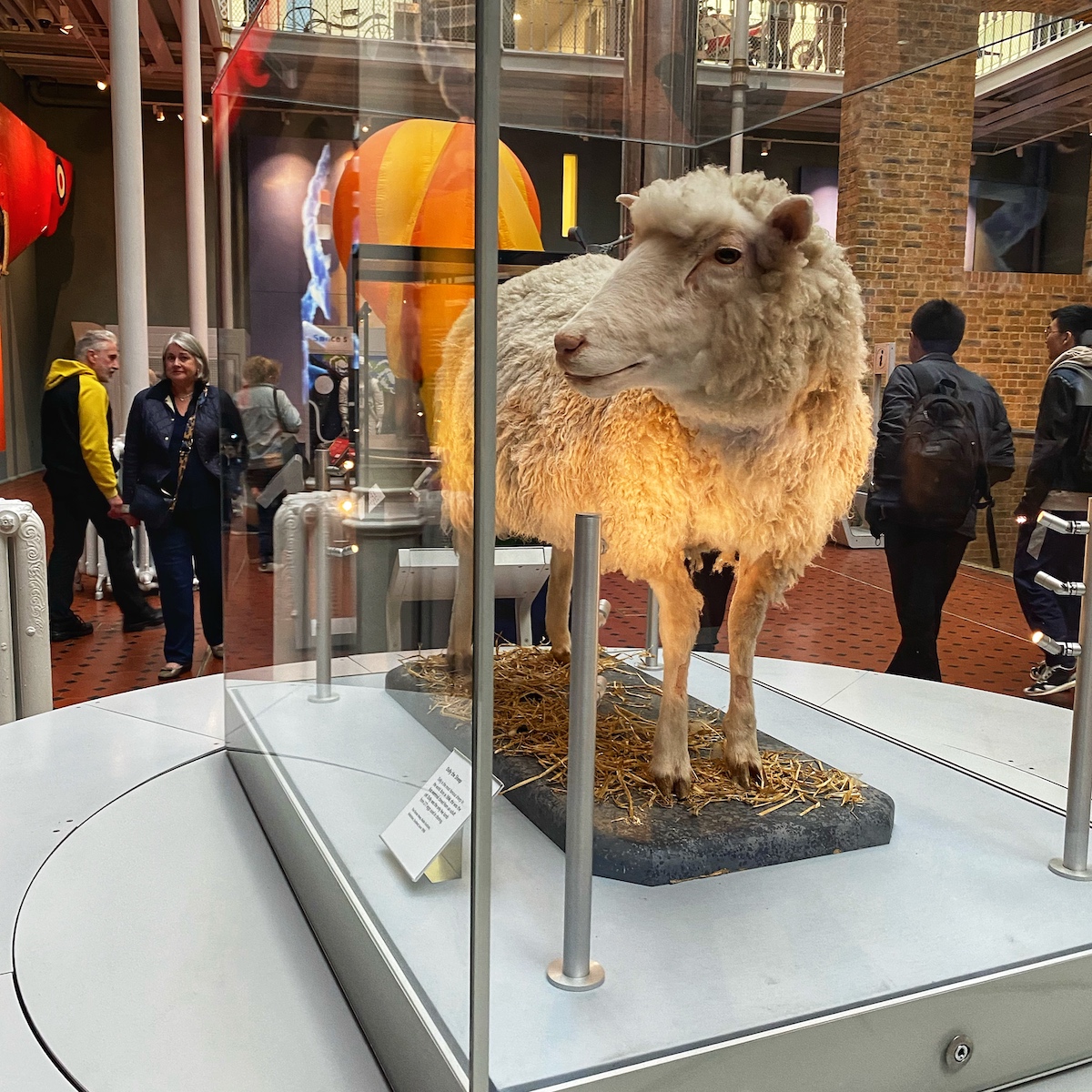 Busses are regular but quite expensive, at 1,80 pounds per trip or about 2 bucks. A fish&chips meal from Bertie’s is 16 pounds if eaten inside the shop or 12,5 if you take it home. A nice soup is a fiver at a local eatery, while the sticky toffee pudding is 5-8 pounds depending on where you eat it. It does taste the same. There’s a Sainsbury’s nearby for the rest with normal prices.

This Scotland travel guide is an introduction to this incredible country. I don’t care that it is part of the United Kingdom, I’m counting it as my 30th country. I’ve yet to visit a place so unique, historic, so wild and beautiful so far. The trails will get me to come back, as well as the people. From Irene the haunted hotel host to Scotty the Scottish guide, they’ve been the highlight of my trip. I really miss this country a lot!

And sure, I’ll miss the stories, the legends and the monsters. Including the monster prices for a Nessie mug. The views, the fresh air, the incredible fish&chips and Dolly the sheep. The Harry Potter cemetery and the wands, the cobbled streets and the towers. The double-decker busses and the Victorian houses, the quiet boroughs and the buzzing centre. Scotland, I’ll be back soon.